What’s in a Name?

There are many articles on how to construct a persona that represents your target audience. However, little attention is ever paid to the actual naming of these fictitious people. It is simply human nature to want to name things. If instead of calling our high school student persona “Martha” we just called her “Student Persona 11A” it wouldn’t have the same impact. Just like real people, names matter and can influence the success or failure of your personas.

The Story of Chuck, Cynthia, and Rob

Alan Cooper is often credited with being the father of modern-day user personas. He wrote about his early work in personas during the 1980s and ’90s before it was common for product teams to visualize the people they designed for. In an early project using personas, Alan used the names Chuck, Cynthia, and Rob to describe three different user types.

Personas turned out to be a great success. Alan reported that members of his team would often refer to their personas by name, such as asking “what would Cynthia do?”, or “is this something Chuck would understand?” during meetings.

Why Does a Name Really Matter?

Personas are based on user research, and UX teams should take a data-driven approach to defining attributes such as experience level, tech-savviness, goals, and pain points of each type of user. Typically, the photo and name used for the persona are an afterthought.

In many cases, you will be stuck with these personas for years to come. A “bad” name can be distracting, offensive, or possibly confusing for your team. These names will be referenced in meetings, emails, and user stories. They will be hung on walls as posters and showcased on your company’s wiki.

You need to make sure that you pick a name that your team will take seriously, but also a name that will be memorable. The name of your persona is just as important as the photo that you select for it because it becomes the representation of that user.

If we want our organizations to think of a persona as representing our users, we need to provide them with a suitable and believable name.

The Process of Naming Personas 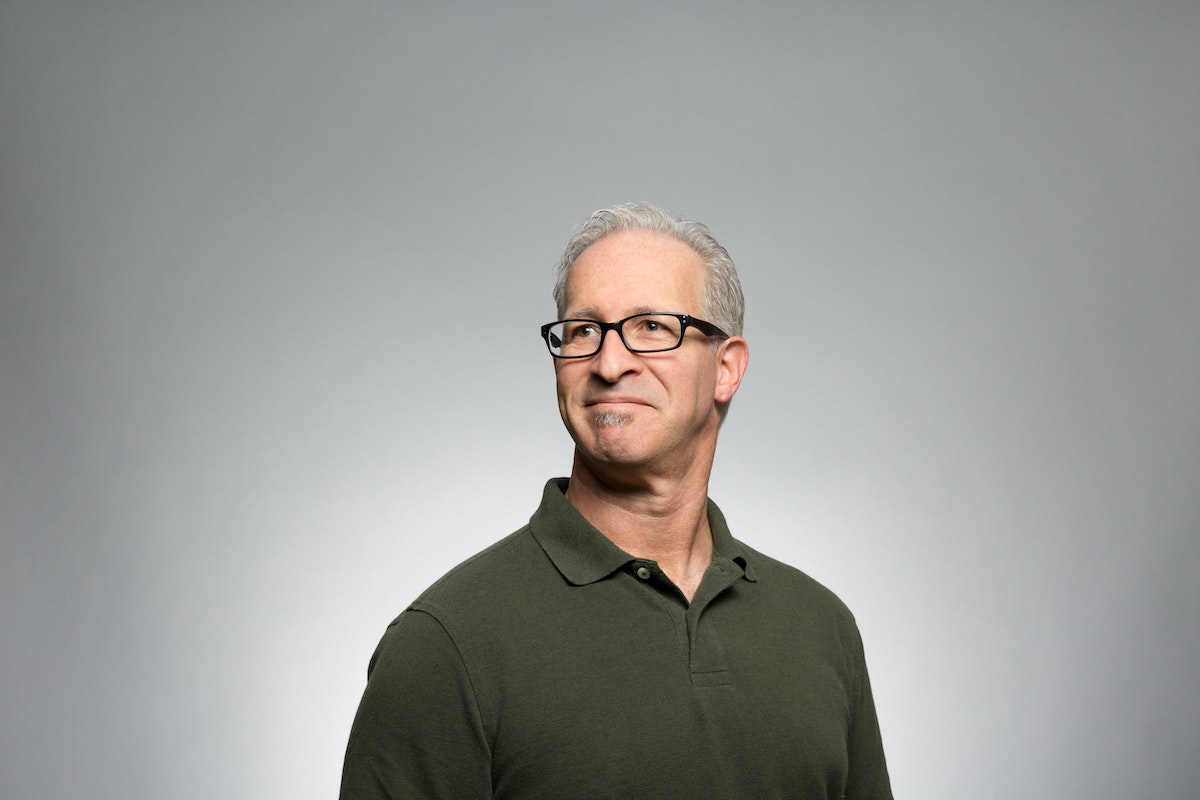 Meet Bob. Or Jim? Maybe Tom? How about Jake…he looks like a Jake. Anyone that has created a persona before has faced the same dillema. There is no shortage of possible names, but how do you find the right one?

How Does the Name Sound?

Consider whether to use a full name or a nickname. Shorter names with few syllables are faster to say and write like “Alex” instead of “Alexander”. Common nicknames like “Bill” instead of “William” could also be used effectively.

Ultimately, you want to pick a name that is easy to pronounce and remember.

Most personas have very common and generic names to keep things simple. There are likely hundreds of personas with the name “Jane Doe” or “John Smith” representing millions of users. If one of the goals of using personas is to help our teams connect with the unique needs of our users, how can we call them “Jane Doe”? Common names are safe, but will likely feel generic and unmemorable to your team.

If you decide to go with a very common name, be sure that it doesn’t match the name of someone well known in your company (e.g. the CEO, a department head, an important client, someone on your team, etc.) as this could become a distraction or cause confusion when referencing your persona.

To reduce confusion, don’t use names that are too similar to each other. For example, do not call one of your personas John, and the others Jonathan, Jona, or Johanna.

Last names are typically optional unless having one represents a unique aspect of that persona, or if you are trying to make a distinction when using a very common first name. Titles can be important if you are representing users that would typically have a title. For example, if you are designing for medical doctors, your persona should have a title such as, “Dr. Martin” and military personnel should include the rank such as, “Colonel Thompson”.

Selecting less common names like Beatrice, Horace, or Roy might help to make the persona stand out, and could increase the likelihood of being remembered. Having your personas be top of mind is a good thing, as long as it is for the right reasons.

Diversity in naming is generally a good idea, but you should be thoughtful when considering these attributes. The goal for your persona should be to accurately reflect the target audience while balancing the value of representing diversity in our population.

Most personas will have either a male or female name however, some names are considered unisex such as Addison, Morgan, or Jesse. Often the gender of a persona is not a relevant attribute and it is appropriate to pick a gender-neutral name without impacting the effectiveness of the persona.

Most organizations tend to stick with common American-sounding names such as Tom, Jim, or Sally. While there is nothing wrong with these names, they might not adequately represent the larger audience that your organization designs for.

If your users are primarily located in a specific region or country it might make sense to use common names associated with that location. For example, if your team will be designing for users who live exclusively in India, you probably wouldn’t want to name your persona with a name commonly found in Germany.

The names of your personas should be top of mind for your organization. One technique is to use alliteration such as “Tony the technician”, “Nina the nurse”, or “Amy the accountant”.

Another technique is to use plosives. Studies show that strong-sounding or “choppy” consonants (like the sound of “P,” “D,” “T” and “K”), used particularly at the beginning, help recall by adding emphasis. Examples of these types of names include “Patricia”, “Daniel”, “Tucker” and “Kurt”.

Steer clear of names of well-known celebrities, politicians, historical figures or any other public individuals. While it would be memorable to call your persona “James Bond” or “Harry Potter”, it will confuse and distract people in your organization.

Do Some Research Before Finalizing on a Name

Before locking in a name that will be widely shared and talked about for years to come, it would be worth doing some research within your organization. For starters, do a search or export the company directory to see which names are most common. If your 100 person organization has 8 people named Susan, you might want to pick something else. 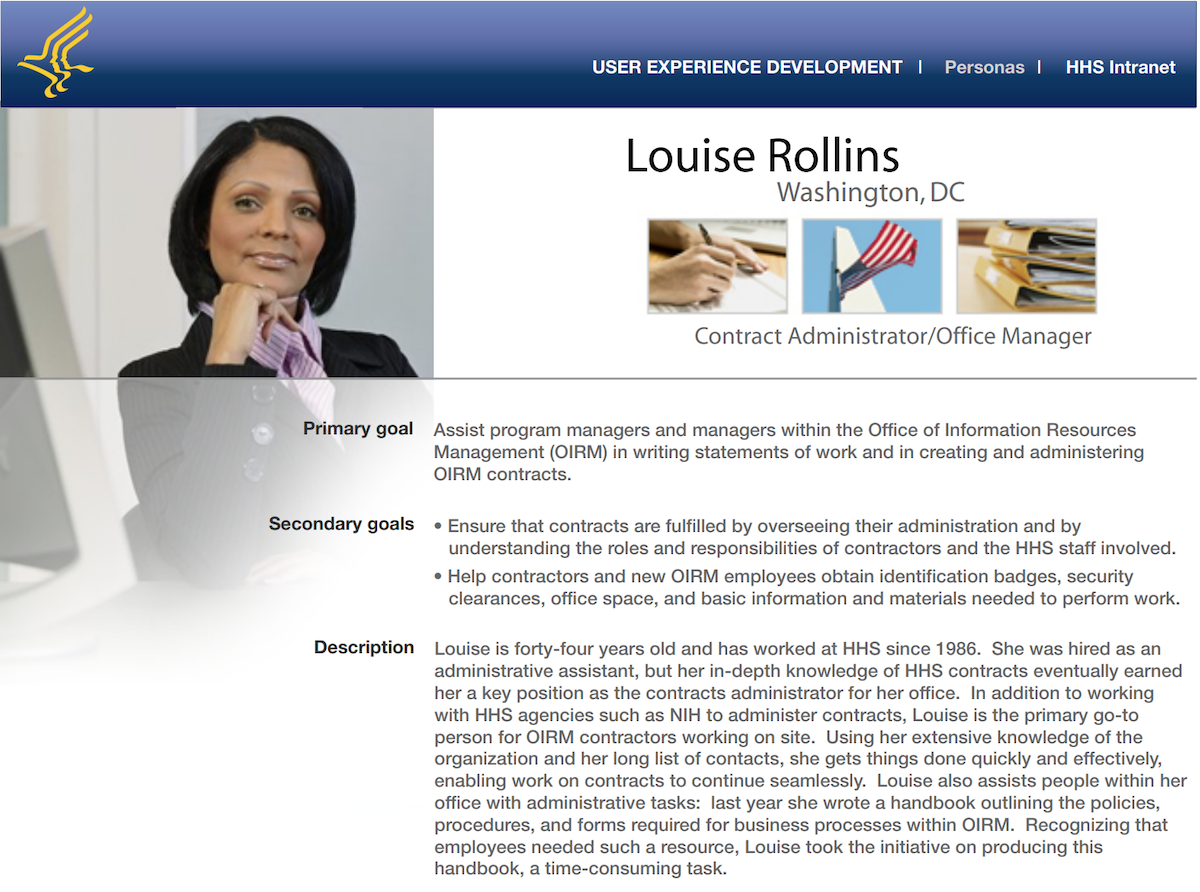 When reviewing a draft of your persona with members of your team, make sure to get their thoughts about the name. How do people first react to it? The goal is not to determine whether they like or dislike the name. Perhaps they associate that name with someone else in the organization or a highly vocal client that everyone knows. Does the name seem to match well with the photo selected for the persona? Keep in mind that this is highly subjective, but it is worth getting the reactions of those within your organization who will be using the personas.

Where Do I Start?

Start by browsing the many freely available name databases that allow you to filter by different attributes.

Finding the right name can help to aid in organizational buy-in, memorability, and will keep your personas top of mind. Having a suitable name is important, but don’t let it distract your team too much from the primary goal, which is to represent the key attributes of the user that would most impact their experience. After all, according to William Shakespeare:

“What’s in a name? That which we call a rose by any other name would smell as sweet.”

Previous Post (p) Dealing with Clients Who Focus on Only One Aspect of a UX Design :: UXmatters

Next Post (n) A UX Guide to CSCW Software: Updating Our Toolkits